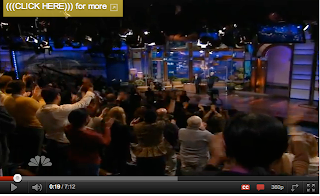 I couldnt stand watching the video and stopped it after 30 seconds as that was my limit.

How could a nation[and the wider society] and its people degenerate to this level ??

In what way is it acceptable for the situation in Libya to be used and reduced to the level of fodder for TV light entertainment for the sake of morons and for the purposes of pure propaganda ???

Its just sick and a symptom of a fallen and corrupted nation in severe decline and as the US declines economically so does everything else and as the economy collapses the police state increases as govt jobs and the police state is a subsidary business sector that thrives in this kind of political and economic climate.

I feel pity for the members of the audience who are too stupid for words and have no idea how fucked they are.Look at them salivating over the baby and child killing fake POTUS.

How can the POTUS smile and laugh and smirk under these kind of circumstances not to mention that he shouldnt be guesting on a fucking chatshow anyway ???

Where is the dignity and shame ???

It is good for the ego of the slick excessively narcissisitic fake lying POTUS and for the members of the personality cult.

A sickening distasteful offensive spectacle of the worst kind.


The United States is FUCKED as well as everywhere else and we all have front row seats to watch the show so make sure that you have lots and lots of popcorn. FYI There will be a short interval every 4 years at election time.

*Not really a fair description nowadays given the situation but anyway.......
Posted by Peter Wolf at 14:00