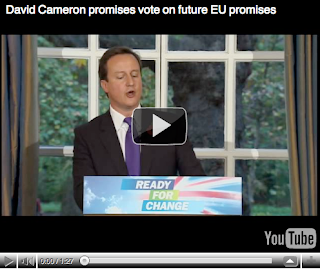 Later but in the meantime there is an amusing picture of CaMoron and a funny headline for your personal enjoyment and amusement/annoyance/irritation.

Ready To Have No Spare Change !!

Do yourselves a favor just this once by avoiding any future election candidate who promises "Change".

The headline to the video is amusing as well.

It must be the BIG SOCIETY that doesnt have political representation and a say on its future or its taxation or its banking system or the NHS or anything else and since that is the case then CaMORONS BIG SOCIETY is nothing but a meaningless and trite election soundbite and a BIG fuck up.The BIG SOCIETY has no say on the Yourapeon Union and in reality its like being treated like a child.

The BIG SOCIETY that CaMoron decrees isnt BIG enough to be able to protest and assemble peacefully.

We have such a BIG SOCIETY that it is used to bail out too big too fails and deliberately sabotaged economies of other nations leaving very little for the so called BIG PEASENT SLAVE SOCIETY of the UK.

GOSH !!! Labour really must get their act together in time for the next election !!! as they will fix it all* !!! but in the meantime we will bash the Tories !!!

If you object to banker bailouts then FUCK YOU

If you object to the EU then FUCK YOU

If you object to the NHS being privatised then FUCK YOU

If you object to increases in student loans then FUCK YOU

If you object to austerity cutbacks then FUCK YOU

If you object to anything then FUCK YOU

FUCK YOU as we will do it anyway.


*I simply do not understand why people still just dont get it.People have this infantile perception that Tories are evil while Labour are inherently good which is a complete misconception and its hardly a bias on my part as Labour wont solve any economic problems so since Labour have betrayed the people they supposedly represent and they enrich the 1 percent then why are they a solution ??

They will probably all blame the Tories for the general failure of the new Left since 1997.Labour stopped being Labour when John Smith had a heart attack in the bath and i dont recognise Labour anymore and i dont recognise Conservatives either as they all have the same agenda.

It was a shame about Robin Cook as well but thats another story as to what happened to him.Lots of murky goings on on the part of the establishment regarding Robin Cook and i am not alluding to there being anything dodgy about Robin Cook either....
Posted by Peter Wolf at 17:24