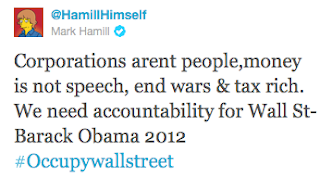 I need to articulate my thoughts on OWS or at least some of them.

"Corporations are not people"

Of course they are not but do any of these OWS protestors understand that the UK and the US are corporations and that legislation is contract law/corporate law/contract agreements and that taxation is the corporate revenue stream that they are complaining about and do they recognise that their govt that doesnt represent them are the adminstrators of the US corporate entity ??

Do any of them recognise that they are tied to the UK/US corporation through a contract and that their SS/NI numbers are part of that contract ?

Do any of them understand that if they nullified the contract between themselves and the UK/US corporation then that would be THE most effective form of peaceful protest there is ??

Does the above @Twitterer understand that themselves and all of the other protestors are simply what is known as Chattel that are owned by the US/UK corporate entities through their respective birth certificate registration contracts and SS/NI numbers ??

Doing this would deprive the UK/US corporate entity of its revenue stream and if this was done enmasse then it would be a massive FUCK YOU to the system of Corporate Fascism and the bankers so why arent they all doing it ????

Does Billy Bragg know about this for example ??

It seems very clear that the majority of the protestors are politically naive and are misguided and have no understanding of exactly what it is that they are dealing with and how everything works.

How can you possibly protest against Wall St and support Barak Obama especially in 2012 ??

DO i have to spell it out for everyone ???

You cannot treat politics like you are a member of a fan club of a personality cult.

Elections are a scam and a deception.

Its not their fault that they are uneductated and naive as they are a product of the education system and my educated guess is the Twitterer/Tweeter is probably aged approx 20 years and to be fair i was clueless when i was that age but not any more as i am self educated.I cant laugh at them on that basis and besides laughing at them will just turn them off so they wont listen.

I dont disagree with that BUT why no mention of privately owned central banks like the FEDRES ???

Where does the cash come from that you pay for to bail out the too big to fails and foreign banks and god knows what else ???

FFS these kids and the majority of the protestors dont know what they are talking about and they arent changing anything and the @Twitterer above is simply creating the pretext for Obama to propose sweeping superficial regulation and accountability of Wall St so that the majority of protestors who are naive and stupid and uneducated will support Obama on that basis in the next election therefore acheiving absolutely N O T H I N G.

They need to be informed and educated about the entire system especially the private central banking scheme and everything else.

There is no arguing with that either so these kids are half right but they dont get the bigger picture yet.......

Did you know ??? that the full extent of the debt and liabilities of the US amounts to approx****** 212 trillion USD******* if you factor in all of it which includes collateralised debt obligations and the obligations of US Treasury Bonds ???

You probably dont but you would have heard that the total US debt is approx 15 trillion so let the 212 trillion figure sink in for a bit..........

Anyway this is just the first stage in the revolution like baby steps and its finding its feet but its not going to just fizzle out although the actual physical protest will fizzle out but the underlying movement against it isnt going to as times will get harder.

How many of you undertand what is known as Odious Debt on the part of govt ??

How many of you know that you are not in any way obliged to be responsible for paying off what is known as Odious Debt ???

The points i make here are what the OWS need to understand and it should be what they are protesting about rather than just Wall ST to the detriment of everything else.
Posted by Peter Wolf at 11:16